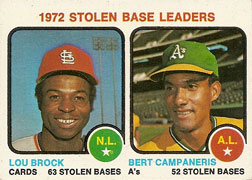 About These Players
Lou Brock played 19 seasons with the Cardinals and Cubs.  A six-time All-Star, Brock led the National League in stolen bases eight times and, eventually, held the Major League record for stolen bases by the end of his career. Brock was inducted into the Hall of Fame in 1985.

Bert Campaneris played 19 seasons with the A's, Rangers, Angels and Yankees.  Also a six-time All-Star, Campaneris led the American League in stolen bases six times.
About This Card
Brock and Campaneris both seemed to have similar careers.  In addition to both being multiple-time All-Stars and stolen base leaders, both played the same number of years and both started and ended their playing careers at about the same time. Both were also key players in multiple World Series wins for their teams, even though they never played against each other.  However, Campaneris seemed to be a poor man's version of Brock; Brock had the higher batting average and OPS, the stolen base record by the end of their careers and the plaque in the Hall of Fame. 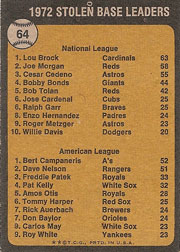 About This Player
Walt Williams played 10 seasons in the Major Leagues and only one season with the Cleveland Indians.  Williams received the nickname "No Neck" for a combination of his short stature, muscular and compact torso and short neck.

Williams made his big league debut with the Houston Colt .45's in 1964.  After 10 plate appearances in 10 games, Williams was selected off of waivers by the St. Louis Cardinals and remained in the minors for almost three seasons.

Williams was traded to the Chicago White Sox in 1967 and got his opportunity to play in the big leagues again.  Williams was known by his hustle and his drive to be great and became a fan favorite during his tenure in Chicago.  Williams, a starting outfielder for the White Sox, hit .304 in 1969; he was one of only six players to hit over .300 and the first White Sox player to do so in six years.

Williams was traded to the Cleveland Indians for Eddie Leon in 1973 and become a backup outfielder and designated hitter for the Tribe.  After one season in Cleveland, he was part of a three-way trade that sent him to the New York Yankees.  The Yankees release Williams after two seasons.  Williams would go on to play two more seasons in Japan.

About This Card
Walt Williams was traded in 1973 and Topps attempted to show this change.  The Indians "C" logo was airbrushed onto the cap while the "S" in "SOX" is still visible on his uniform. 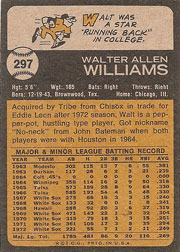 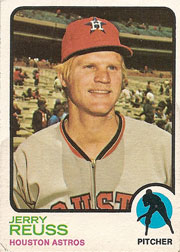 About This Player
Jerry Reuss pitched in 22 seasons for eight different Major League Baseball teams.  Reuss is a two-time All-Star with a start in 1975 with the Pirates and a selection in 1980 with the Dodgers.

Reuss made his big league debut in 1969 for the St. Louis Cardinals.  Reuss joined the Houston Astros in 1972 in a trade that included Scipio Spinks.  After two seasons with the Astros and a 1973 season in which he led the league in walks, Reuss was traded again to the Pittsburgh Pirates for Milt May.
Reuss' career took after arriving in Pittsburgh.  He pitched the next five seasons with the Pittsburgh Pirates, which included a start in his first All-Star Game in 1975 and starts in the National League Championship Series in 1974 and 1975.

Reuss was traded to the Los Angeles Dodgers in 1979 with whom he pitched nine seasons.  His finest season came in 1980 in which pitched to a 18-6 record, threw a no-hitter, was selected to his second All-Star Game and finished the season as the Comeback Player of the Year and second for the Cy Young Award.  He also pitched in the World Series with the Dodgers in 1981.

In 1988 while with the Chicago White Sox, Reuss earned his 200th win become only the second pitcher with 200 wins without a 20-win season.  Milt Pappas was the first and Reuss was later joined on that list by Charlie Hough.

Reuss ended his career back with the Pirates and pitched his last game in 1990.

After retiring from baseball, Reuss worked in broadcasting as a color analyst for ESPN and the Anaheim Angels.  Since 2006, Reuss has been working in radio and TV for the Los Angeles Dodgers broadcasts.

For more information:
Jerry Reuss
About This Card
In 2013, the Houston Astros, along with their move to the American League, will be wearing uniforms and hats designed similarly to what Reuss is wearing in his photo. 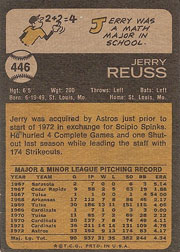