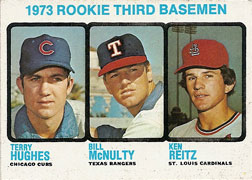 About These Players
Terry Hughes was only in the big leagues briefly in three seasons.  Hughes played in only two games with a total of three at bats for the Chicago Cubs in 1970.  He returned to the Majors in 1973 with the St. Louis Cardinals with whom he spent only 11 games and spent 1974 in 41 games with the Boston Red Sox.

Bill McNulty played in a total of nine games with the Oakland A's in 1969 and 1972.  Though he was traded to the Texas Rangers in 1973, he never played a game on the big league roster.

Out of the three players, Ken Reitz had the most successful career.  Reitz made his big league debut in 1972 and earned the starting third base spot immediately after being called up.  In his 11-year career, Reitz played with the St. Louis Cardinals in eight of them.  Known for his defense, Reitz won the Gold Glove in 1975 and led all National League third basemen in fielding percentage in six seasons.  Reitz earned his only All-Star selection in 1980.

About This Card
Hughes, McNulty and Reitz all appear for their first times in the 1973 set.  Hughes appears as a Cub, even though he was on the Cardinals roster and appeared in some games in 1973.  McNulty was in the Rangers organization in 1973, but never played a game for Texas. 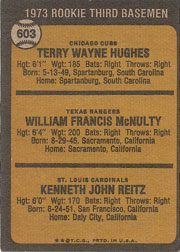 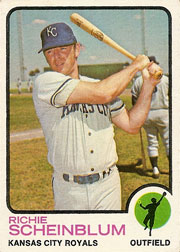 About This Player
Richie Scheinblum played eight seasons in the Major Leagues with six different teams.  Scheinblum made his big league debut in 1965 with the Cleveland Indians and spent the early part of his career bouncing in and out of the minors.

However, Scheinblum had his finest season with the Royals in 1972.  He played as the team's starting right fieldr and hit .300 becoming the only Jewish switch-hitter to bat .300 during a full season.  He also earned an All-Star selection that year.

Scheinblum's career faded quickly.  His batting average dropped and he bounced around five different teams in the next two years.  Scheinblum played his final game in 1974.

About This Card
An interesting fact as detailed on the back of his card was that Scheinblum hit his first home run on the day Neil Armstrong landed on the moon.  Scheinblum was not regarded as much of a power hitter and would go on to hit on 13 home runs throughout this eight-year career. 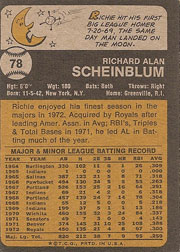 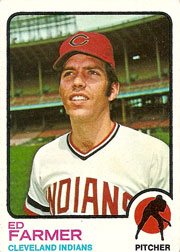 About This Player
Ed Farmer enjoyed 11 seasons as a Major League reliever with eight different teams.  Farmer made his big league debut with the Cleveland Indians in 1971 with whom he spent parts of this first three seasons.  Farmers had his finest season with the Chicago White Sox in 1980 with whom he earned 30 saves, a 3.38 ERA and a selection to the All-Star team. 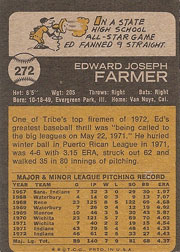 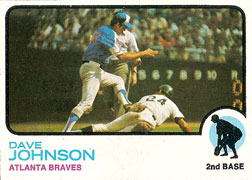 About This Player
Davey Johnson played 13 years in the big leagues and three of them with the Atlanta Braves.  Johnson began his playing career and spent the majority of it with the Baltimore Orioles.  During his tenure with the O's, Johnson started at second base for four American League pennants and two World Series Championships. He also made three of his four All-Star appearances as an Oriole and won three Gold Glove Awards.

Johnson, after a poor 1972 season, was traded to the Atlanta Braves and responded with the best offensive numbers of his career.  Johnson had career numbers in 1973 in runs (84), hits (151), home runs (43) and RBI (99).  He earned his fourth All-Star selection that year.  Johnson tied Rogers Hornsby's single season record for home runs for a second baseman with 42; one on Johnson's home runs came as a pinch-hitter.  The 1973 Atlanta Braves also featured the first trio of teammates to hit 40 home runs in a season; Darrell Evans hit 41 and Hank Aaron hit 40.

After getting a hit in his only at bat in 1975, Johnson was released by the Braves.  He spent 1975 and 1976 playing in the Japanese league.  He returned to the play in the U.S. in 1977 with the Philadelphia Phillies and finished his playing career with the Chicago Cubs in 1978.  In the 1978 season, Davey Johnson became the first player to hit two grand slams in pinch-hit at bats.

Johnson is probably more profilic for his career as a manager.  Johnson has spent 16 seasons as a manager at the Major League level with division pennants with the New York Mets, Cincinnati Reds, Baltimore Orioles and Washington Nationals and a World Series Championship with the Mets in 1986.  Johnson was selected as American League Manager of the Year in 1997 with the Orioles.

Johnson is the current manager of the Washington Nationals.

About This Card
To reflect many of the trades that had taken place during the offseason and current season, Topps often airbrushed the new uniforms on a player.  Davey Johnson appears in this photograph in a Braves uniform at the end of the first turn of a double play with New York Yankees' Felipe Alou having slid through second base even though the Braves did not play the Yankees.

This play took place, with Johnson as an Oriole, on September 17, 1972.  Alou hit a single in the bottom of the second inning.  Thurman Munson followed by grounding into a 6-4-3 double play.

In addition to Johnson having been airbrushed into a Braves uniform, Topps also airbrushed over the first half of the scoreboard on the right field wall in Yankee Stadium.

Special thanks to Chris Stufflestreet and his 1973 Topps Photography blog. 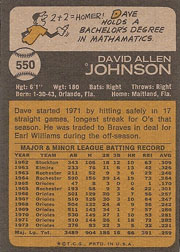 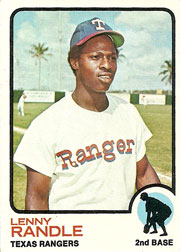 However, he had his breakthrough season in 1974 in which he played in 151 games and hit .302 for the season. In 1974 and 1975, Randle started at second base, third base and in the outfield.  In 1976, Randle was named the starting second baseman for the Rangers.

Spring Training of 1977 would mark one of the ugliest moments in Rangers history.  Rookie, Bump Wills, was given the starting job at second base from the start of spring training.  Randle complained to manager, Frank Lucchesi and demanded to start or be traded.  Lucchesi, incensed by the confrontation, complained to writers to whom he insisted publish his comments.  On March 28, the day the Sports Illustrated magazine with Wills on the cover hit stands, Randle confronted Lucchesi and punched him in the face.  Lucchesi was hospitalized for a week and need plastic surgery to repair his cheekbone that was broken in three places.  Randle was suspended by the team for 30 days and traded to the New York Mets before the end of his suspension.  Lucchesi would return to the team before the Opening Day, but later fired mid-season.


Randle ended up having his most productive season in 1977 with career highs in batting average (.304), on base percentage (.383), slugging percentage (.404), home runs (five) and stolen bases (33) with the last place Mets.  After a poor 1978 season, Randle was released.  He later spent time with the New York Yankees and Seattle Mariners.

In 1983, Randle became the first American Major League Baseball player to play in Italy where he won the Italian batting title with a .477 batting average.

About This Card
Nothing much for me to write about this card.  I have either attained it as part of an eBay lot or as a single from my local store or online. 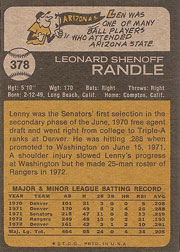 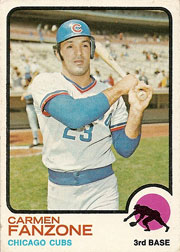 About This Player
Carmen Fanzone enjoyed five seasons in the big leagues and four of them with the Chicago Cubs.  Fanzone made his Major League debut with the Boston Red Sox in 1970 and played in 10 games that year.

Fanzone was traded the following year to the Cubs and responded with a home run in his first National League at-bat against Astros' pitcher, Ken Forsch.  He spent his tenure as a utility infielder and pinch hitter.  His best season came in 1972 in which he substituted for an injured Ron Santo at third base.  In his 86 games that year, Fanzone set career highs in home runs, RBIs and runs.

About This Card
Although Carmen Fanzone made his Major League debut in 1970, he would not make his Topps debut until 1973. 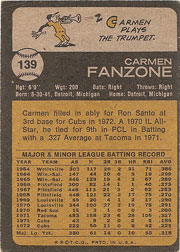 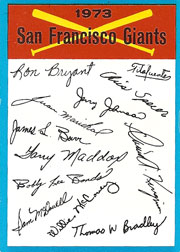 About This Card
Every team checklist in the 1973 Topps set features 12 different facsimile autographs on the front.  Considering what we know today from current stars, it is a nice throwback to see autographs that are legible. 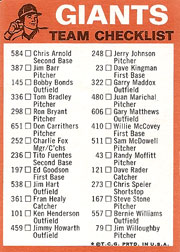