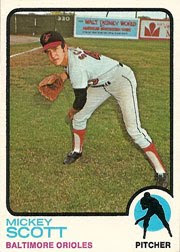 About This Player
Mickey Scott enjoyed a five year career as a middle reliever for the Orioles, Expos and Angels.  Scott was originally drafted by the White Sox and later traded to the Orioles prior to his rookie season in 1972.

About This Card
While this card is Mickey Scott's third regular issue Topps card, he had his rookie card in 1970... two years before his Major League debut.  While it is very common today for a player to have a rookie card years before his debut, this was not common in 1970. 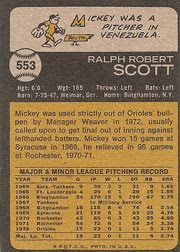