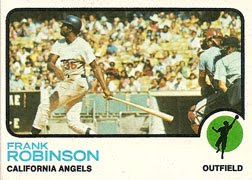 About This Player
Frank Robinson enjoyed an illustrious 21 year career in the Major Leagues.  While Robinson played in only two seasons with the California Angels, he is better recognized for his playing time with the Cincinnati Reds and the Baltimore Orioles.  Robinson won the National League Rookie of the Year Award in 1956 and won two MVP Awards in 1961 with the Reds and 1966 with the Orioles.  Between the two teams, Robinson played in five World Series.  Robinson was also a 12-time All-Star. In 1975 and 1976, the last two years of his playing career, Robinson served as a player-manager and also became the first African-American manager in Major League history.  At the time of his retirement, Robinson ranked fourth on the all-time home run list.  Robinson was inducted into the Hall of Fame in 1982.

About This Card
The Frank Robinson card is one of the few cards I bought as an upgrade.

Another interesting note about the photography is the white-out over his jersey.  Robinson has played for the Dodgers in 1972, but was traded to the Angels prior to the 1973 season.  While the "Dodgers" had been removed from the jersey, he still appears in Dodger blue. 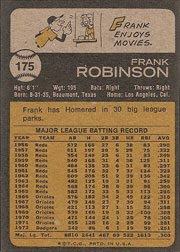