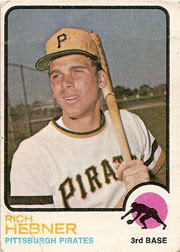 About This Player
Rich Hebner enjoyed 18 seasons in the big leagues and his first 11 with the Pittsburgh Pirates.  Hebner had one plate appearance in 1968 and established himself the following year as the team's starting third baseman.  He was also part of the 1971 World Series Championship team; in that series against the Orioles, Hebner accounted for all of the Pirates' runs in the 11-3 loss in Game 2.  Hebner later played for the Phillies, Tigers, Mets and Cubs throughout his playing career.

About This Card
The Rich Hebner card is one of the worse conditioned cards in my set.  I had gotten this one from the first lot purchased on eBay to start off the set.  Early in my set building, condition is not very important and I am looking just to build up the set.  Usually with the commons, I am not looking actively to replace worse conditioned cards, but, many times I find a copy in better condition from later lots. 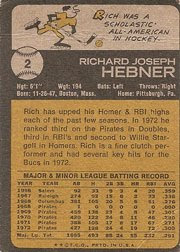