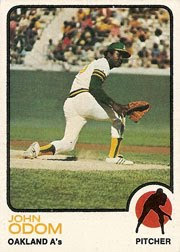 About This Player
John "Blue Moon" Odom pitched in the Major Leagues for 13 seasons; 12 of those seasons he pitched with the Kansas City and Oakland A's.   Odom was selected as an All-Star in 1968 and 1969 and pitched on three Oakland A's World Series teams.  An excellent athlete, Odom was also used frequently as a pinch-runner.

Odom has given his nickname "Blue Moon" by a high-school friend who thought his round face resembled a moon.

About This Card
Despite being known throughout baseball as "Blue Moon," all of his Topps cards scribe him as John.  However, in his 1975 Topps card which used facsimile autographs, Odom had written his name as "Blue Moon."

This card was one of a number of cards I had purchased from GinAgain Cards during their sale just before Christmas.  I do not remember how much I paid, but it is a good place to find singles at a good price. 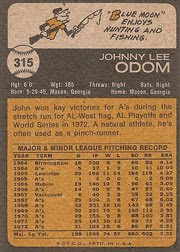