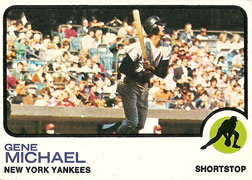 About This Player
Gene Michael enjoyed ten seasons in the Major Leagues and seven of them with the New York Yankees.  Nicknamed "Stick" from his skinny frame, Michael made his big league debut with the Pittsburgh Pirates in 1966.  He was traded the following year in played the Dodgers in 1967.  HIs contract was purchased by the Yankees the following year and Michael soon established himself as the team's regular shortstop.  After his tenure with the Yankees, Michael signed as a free agent with the Detroit Tigers and played there in 1975.  He was signed by the Boston Red Sox in 1976, but did not play a game with the club.

About This Card
Although known more for his defense than his hitting, Gene Michael is shown following through with a hit.  I enjoy this card for its photograph. The composition is laid in a landscape layout and the crowd looking on in the background. 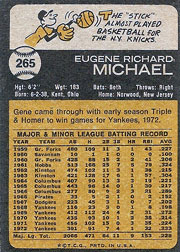