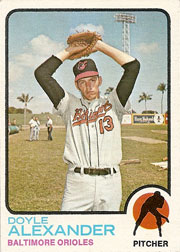 About This Player
Doyle Alexander enjoyed 19 seasons in the Major Leagues pitching for eight different teams.  Alexander was also the fourth pitcher to get a win against all (at that time) 26 teams.

Alexander made his big league debut with the Dodgers in 1971.  After he was sent the following year to the Orioles as part of a trade that sent Frank Robinson to the Dodgers, Alexander established himself as a Major League starting pitcher.  Alexander spent the next five seasons in Baltimore and earned his first winning season in 1973.

However, Alexander would experience his finest seasons afterward.  He would spent time with the Yankees, Rangers, Giants, Blue Jays and Tigers.  His finest seasons came in 1984 and 1985 with the Blue Jays in which he would earn 17 wins in each of those seasons.  Alexander also won eight straight games while in Toronto, a club record.  Alexander would be selected to his only All-Star Game in 1988; his 18th season.  In 1989, Alexander pitched an American League leading 18 losses and gave up a league leading 28 home runs to end his final season.

About This Card
The back of the 1973 card describes Doyle Alexander as "one of the best young hurlers in the majors."  Alexander was in good company on an Orioles pitching staff that included perennial 20-game winners Jim Palmer and Mike Cuellar. 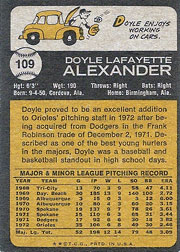