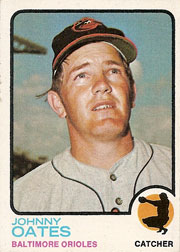 About This Player
Johnny Oates enjoyed an 11-year career as a reserve catcher for five different teams.  Oates made his Major League debut with the Orioles in September 1970, though he was not on the roster for the World Series.  Oates became the O's regular catcher in 1972 and showcased his defensive abilities with an American League leading .995 fielding percentage that season.  Oates was traded to the Braves in 1973 and spent two seasons platooning first with Paul Casanova and later with Vic Correll.  Oates was traded again to the Phillies were he platooned with Bob Boone.  In the season-opening game against the Pirates in 1976, Oates broke his collarbone in a collision at home plate with Dave Parker and missed most of the season.  The play changed his career and Oates would see his playing diminish in the following years with the Dodgers and Yankees.  Oates played his final game in 1981.

However, Oates experience his greatest success as a Major League manager.  He served as a manager for 11 seasons with the Orioles (1991-1994) and Rangers (1995-2001).  As the Rangers' manager, Oates led his team to three first-place finishes in the American League West and earned Manager of the Year honors in 1996.

About This Card
Although Johnny Oates appears in this set as a member of the Orioles, he played the entire 1973 season with the Atlanta Braves. 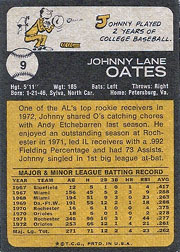