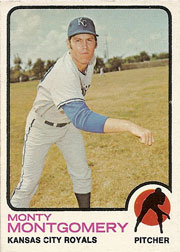 About This Player
Monty Montgomery played very briefly in parts of two seasons for the Royals.  During his time in the big leagues, Montgomery pitched to a record of 6-3 with a 2.78 ERA in 12 appearances.

About This Card
Topps described Montgomery in 1973 as "one of Royals' brightest hopes for future stardom."  However, despite an American Association leading 7 shutouts in 1972 and very proficient numbers with the big league club, Montgomery would never pitch in the Majors again.  His pitching performances worsened in the minors the following years and Montgomery was out of professional baseball after 1974. 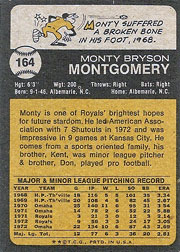