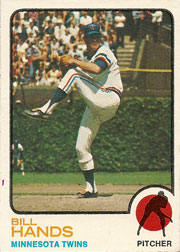 About This Player
Bill Hands enjoyed 11 years as a Major League pitcher.  Hands made his big league debut in 1965 with the Giants.  Hands was traded to the Cubs the following season and spent seven seasons with them.  Hands was traded to the Twins in 1973 and spent two seasons with Minnesota.  He was picked up from waivers by the Rangers in September 1974 and played through 1975 before retiring.

About This Card
Bill Hands appears in this card in an obvious airbrushed uniform.  Hands was traded from the Cubs to the Twins prior to the 1973 season.  Shown pitching at Wrigley Field, Hands appears with the Twins cap.  However, the stripes on the uniform look closer to a Rangers uniform than a Twins uniform.  Maybe Topps knew Hands would be picked up from waivers by the Rangers. 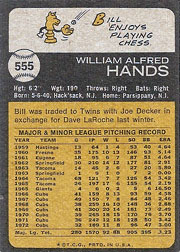