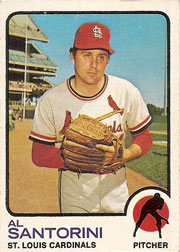 Probably the biggest highlight of his career:
May 26, 1971 - Al Santorini, pitching for the Padres, started both games of the double header against the Houston Astros.  In the first game, Santorini, a right-hander, pitched to one right-handed batter to start the game.  He was relieved immediately by Dave Roberts, a left-hander, to face the next seven batters, all of whom were lefties.  In the second game, Santorini pitched solidly for six innings.  However, the Padres lost both games of the double header.

About This Card
By his look, Al Santorini must have known he would not be around much longer.  After six games and a 5.40 ERA to start off 1973, Santorini was traded to the Royals for Tom Murphy.  Santorini was immediately demoted to Triple-A and spent the rest of his playing career in the minors. 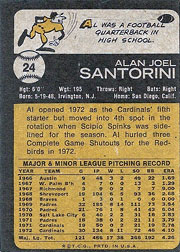