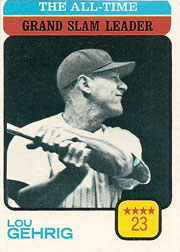 About This Player
Lou Gehrig played 17 seasons with the New York Yankees before the disease that now bears his name ended his career prematurely and led to his untimely death.  Gehrig, nicknamed the "Iron Horse" for his toughness, longevity and his then-record 2,130 consecutive game streak, was among the greatest hitters in the history of baseball.  Throughout his illustrious career, Gehrig was a six-time All-Star, two time MVP, a Triple Crown winner in 1934 and won seven World Series with the Yankees.

Gehrig played his final game on April 30, 1930.  He was elected to the Hall of Fame in December of that year; only one of three players elected without the mandated waiting period.

For more information about Lou Gehrig:
The Official Web Site of Lou Gehrig

About This Card
Lou Gehrig is listed with as the all-time leader for grand slams, a record that still holds today.  Currently Yankee, Alex Rodriguez, is now second on the list with 21 grand slams. 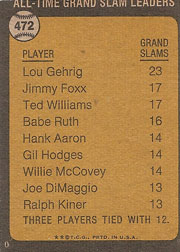