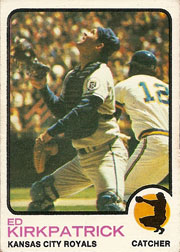 About This Player
Ed Kirkpatrick enjoyed a 16-year career in the big leagues.  Also known as "Spanky," Kirkpatrick made his Major League debut with the expansion Los Angeles Angels in 1962.  He was the target of the Royals' first trade just before their inaugural season in 1969.  Kirkpatrick spent five seasons in Kansas City and he got the last hit in Municipal Stadium in Kansas City on October 4, 1972.  Kirkpatrick also spent time with the Pirates, Rangers and Brewers.  Kirkpatrick played his final game in 1977.

In 1981, Kirkpatrick was in a car accident that relegated him to a wheelchair for the rest of his life.

Kirkpatrick died on November 15, 2010 after battling throat cancer at the age of 66.

About This Card
Kirkpatrick is shown looking for a pop-up off of the Brewers, Johnny Briggs.  This play took place on June 17, 1972 at County Stadium in Milwaukee as "Spanky" caught the foul out in the bottom of the 4th inning. 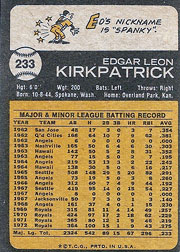