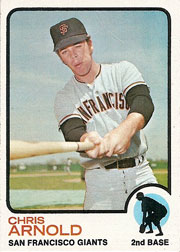 About This Player
Chris Arnold enjoyed six seasons with the San Francisco Giants from 1971 through 1976 as a utility infielder and pinch hitter.  Though he only hit four home runs during this career, half of them were off of current Hall of Famers: one came in his third major league at bat, against Phil Niekro on September 10, 1971 and the other came against Steve Carlton on May 1, 1974.  Still, one of the other two was a pinch-hit grand slam with two out in the bottom of the 9th inning during a comeback victory against the Pittsburgh Pirates on May 1, 1973.

After his career ended with the Giants in 1976, Arnold spent another three years in Japan with the Osaka Kintetsu Buffaloes.  Arnold currently runs a successful sports agency, Professional Sports International, out of his home in Denver.

About This Card
I picked up this card, along with a few other high-number cards, at a local card show.  Normally, the high-number cards would cost about $2-3 in Ex-NrMt condition, but, fortunately, I found a dealer who was very sympathetic to set builders and charged me $20 for 30 high-numbers. 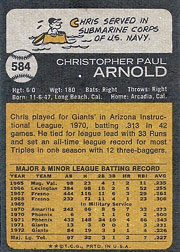