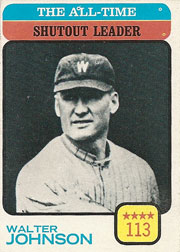 About This Player
Walter Johnson enjoyed an illustrious 21-year career with the Washington Senators from from 1907 through 1927.  As the premier pitcher of his era, "The Big Train" earned the American League MVP Award in 1913 and 1924, won the American League Triple Crown in 1913, 1918 and 1924 and places second on the all-time wins list and, for a long time, held the first spot on the all-time strikeout list.

Johnson holds the Major League record for shutouts at 110, a record that will never be broken.  Grover Cleveland is second on the shutouts list with 90 shutouts and Roy Halladay, age 34, is the current leader among active players with 19 shutouts.

After his playing career ended, Johnson would manage the Senators from 1929 through 1932 and later the Cleveland Indians from 1933 through 1935.  Johnson was part of the inaugural class elected to the Hall of Fame in 1936.  Johnson passed away in 1946 at the age of 59.

About This Card
This 1973 Topps card displays Walter Johnson's total number of shutouts at 113.  However, as baseball historians went back through box scores and records and corrections were made, Johnson's shutouts were updated to 110. 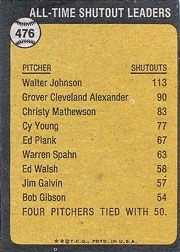