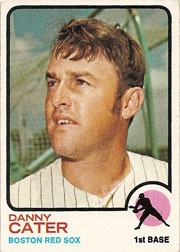 About This Player
Danny Cater enjoyed 12 seasons in the Major Leagues and three of those seasons with the Boston Red Sox. Nicknamed "Carter" because of the newspaper's tendency to add the extra "r" to his name, Cater made his big league debut with the Phillies in 1964.  Cater had spent time with the Phillies, White Sox, Athletics, Yankees, Red Sox and Cardinals throughout his career playing at first base, left field and third base.

As a player, Cater had a reputation as an unassuming player.  From 1965 through 1971, Cater had over 500 plate appearances.  He was a good hitter at a time when batting averages were low finishing in the top ten in batting average three times and hitting a second-place .290 average in 1968 behind Carl Yastrzemski's league leading .301 average.  He was also known for his efficiency at the plate; manager Gene Mauch said of him during his rookie year, "he came up 10 times and saw 11 pitches."

For more information on Danny Cater:
"The Name is Carter-er, Cater" Sports Illustrated. May 19, 1969.


"Cater, by the way, has the reputation of being able to figure out his batting average to four decimal places on his way down to first base." - Jim Bouton, Ball Four

About This Card
Danny Cater is shown wearing pinstripes, despite having been with Boston for the entire 1972 season.  Cater was traded to the Red Sox as part of a trade that sent pitcher Sparky Lyle to the Yankees. 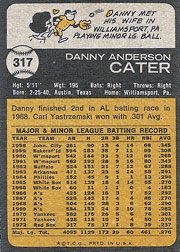