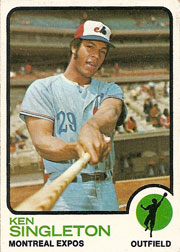 About This Player
Ken Singleton enjoyed 15 seasons as a right fielder and designated hitter in the Major Leagues and three of them with the Montreal Expos.  Singleton, a former first round draft pick in 1967 out of Hofstra University, made his big league debut with the New York Mets in 1970.  After two seasons with the Mets, Singleton was traded to the Expos as part of a package that sent Rusty Staub to New York.  Singleton establish himself as a starting right fielder during his three years in Montreal.  Singleton was traded again in 1975 and enjoyed his best years with the Baltimore Orioles.  As an Oriole, Singelton was selected to three All-Star Games, including a start in left field in 1981.  He was also a part of two American League Championship teams in 1979 and 1983 and helped Baltimore to a World Series win in 1983.  In addition, Singleton earned the Roberto Clemente Award in 1982.  Singleton ended his 15 year career in 1984.

Singleton currently works as a commentator and color analyst for the New York Yankees on the YES Network.

About This Card
Singleton's 1973 card describes him as the Expos' second leading hitter and the club leader in runs, hits and doubles from the previous season. Singleton would go on to have an even better season in 1973 with a .302 batting average, 23 home runs and 103 RBI.  He also led the National League with a .425 on base percentage.  Singleton also proved to be a defensive specialist with a league leading 20 assists from the outfield. 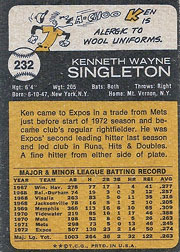