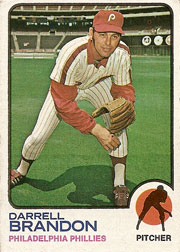 About This Player
Darrell G. "Bucky" Brandon enjoyed seven seasons in the Major Leagues.  Brandon was originally signed by the Pirates in 1959 as an outfielder, but struggled and was later released.  He tried out of the Houston Colt .45's in 1962 as a pitcher and earned a place in their minor league system.

Brandon was later traded to the Red Sox in 1966.  He earned a roster spot as a reliever out of Spring Training and made his Major League debut that year.  Brandon remained on the big league roster and would start occasionally throughout 1966 and 1967.  In 1968, however, Brandon would struggle and be sent down to the minors.  Brandon was later selected by Seattle Pilots in the expansion draft in 1969 and traded mid-season to the Twins who later released him after the end of the season.

Brandon would return to the Majors with the Phillies in 1971 primarily as a reliever and would remain on the big league roster throughout the 1971 and 1972 seasons.  However, Brandon would play most of his 1973 season and all of his 1974 season in the minors.  Brandon's final big league game would be played in 1973.

About This Card
Although his Topps cards always labeled him as "Darrell Brandon", he was better known as "Bucky Brandon" throughout his big league career.


"When I was in class D ball," Brandon explained, "there was this little Indian kid from California on the team, and he had buck teeth. He had "Bucky" carved into his glove, and I ended up buying it from him. A few years later, when I went to spring training with Houston, I had it with me. It was really beaten up, so the guys on the team gave me a hard time about it and started calling me "Bucky."- Bucky Brandon, The 1967 Impossible Dream Red Sox: Pandemonium On The Field 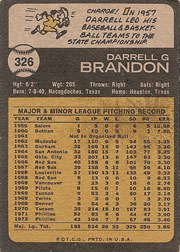