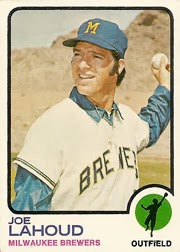 About This Player
Joe Lahoud played in 11 Major League seasons for five different teams.  Lahoud, of Lebanese decent, made his big league debut with the Boston Red Sox in 1968.  He spent most of his career as a backup outfielder and pinch hitter.

Lahoud has a distinction of being involved in trades involving at least nine players twice in his career.  In his case, the trades took place on both sides of his tenure with the Milwaukee Brewers.  After the 1971 season, Lahoud was traded from the Red Sox along with Ken Brett, Billy Conigliaro, Jim Lonborg, Don Pavletich, and George Scott in exchange for Pat Skrable, Tommy Harper, Lew Krausse, and Marty Pattin.  After the 1973 season, Lahould was traded to the California Angels along with Ollie Brown, Skip Lockwood, Ellie Rodriguez, and Gary Ryerson in exchange for Steve Barber, Ken Berry, Art Kusnyer, and Clyde Wright.

Lahoud would later spend time with the Texas Rangers and Kansas City Royals before playing his last game in 1978.

About This Card
The 1973 Topps Photography blog written by Chris Stufflestreet points out the big mound of dirt in the background of this card and of Jim Lonborg's card.  This photo was taken at Tempe Diablo Stadium in which there is a big hill outside the park down the left field line.  (Credit to "K Wc" who posted on Chris' blog.) 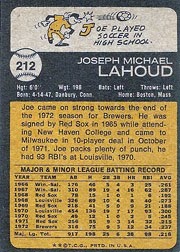