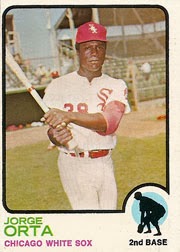 About This Player
Jorge Orta enjoyed 16 seasons in the Major Leagues and eight of them with the Chicago White Sox.  Orta, born in Mexico, is the son of Pedro Orta, a Cuban-born outfielder who was a baseball superstar during his career in the Mexican League.  The younger Orta also turned down a basketball scholarship at UCLA to start his professional career in the Mexican League.

Orta was signed by the White Sox out of the Mexican League.  He made his Major League debut in 1972, although he spent much of the year with the Double-A Knoxville Sox.  Orta earned the starting second base position in 1973. Orta hit for a batting average of .316 in 1974 and finished second in the American League batting race to the Minnesota Twins' Rod Carew.  Orta earned the first of his two All-Star selections in 1975.

Orta signed as a free agent with the Cleveland Indians in 1980 and became the team's starting right fielder. Orta got six hits in a game on June 15, tying an American League record for most hits in a game.  (In the same game, Toby Harrah drove in seven runs in the 14-5 win over the Minnesota Twins.)  Orta was later selected to his second All-Star game.

Orta would be traded later to the Los Angeles Dodgers, New York Mets and Toronto Blue Jays before arriving to the Kansas City Royals.  As a member of the Royals, Orta would become a platoon designated hitter sharing the role with Hal McRae.

Orta became the center of a controversial blown call in Game 6 of the 1985 World Series.  In the ninth inning, Orta coming in as a pinch hitter, would be called safe on a close play at first base.  Replays showed that the pitcher tagged the base before Orta reached, but the momentum would shift in the Royals' favor and the would win the game and the series against the St. Louis Cardinals.

Orta played his final game with the Royals in 1987.

Orta was inducted into the Mexican Baseball Hall of Fame in 1996. 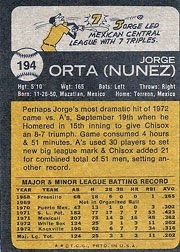