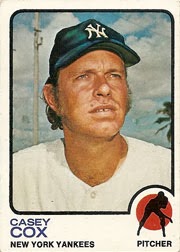 About This Player
Casey Cox pitched in eight Major League seasons and two of them with the New York Yankees.  Cox played the majority of his career in relief for the Washington Senators.  Cox experienced his finest season in 1969 in which, as a relievers and spot starter, he pitched to a 12-7 record with a 2.78 ERA.  Cox was traded to the Yankees on August 31, 1972, pitched in five games for New York that season, and was released after pitching one game in 1973.

About This Card
I've stated before that I will take any card, regardless of condition, as long as I need it to build my set.  Here is one example, which has been marked with "OR" on the back.  There are a few other cards marked like this in my set.  Perhaps the initials of a previous owner? 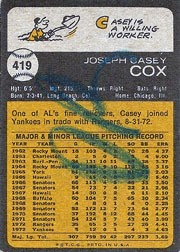