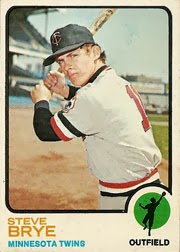 About This Player
Steve Brye enjoyed nine seasons in the Major Leagues and seven of them with the Minnesota Twins.  Brye was drafted by the Twins in the first round (17th overall) of the 1967 amateur draft and made his big league debut in 1970.  He soon established himself in a platoon role in the outfield.  Brye had his finest season in 1974 in which he played 128 games in center field, hit .283 with 2 home runs and 41 RBI, and led all American League outfielders with a .997 fielding percentage.

Brye found himself in the middle of controversy surrounding the 1976 American League batting title.  The Royals' George Brett and Hal McRae and fellow Twin, Rod Carew were caught up on the batting race on the last game of the season in which the Twins played the Royals.  In the ninth inning, Brye misplayed a ball hit by Brett that resulted in an inside-the-park home run.  McRae in the next at-bat grounded out.  McRae alleged racism from the Twins and Twins' manager, Gene Mauch, angrily denied it.  Carew and Twins outfielder, Larry Hisle, both also black, denied any racism claims.

“No way. … If any error was involved it was mine. Gene Mauch had nothing to do with it. Gene told me to play in shallow. The last couple of innings I played deep not to allow a ball to get over my head and keep alive the possibility of a double play if a man got on base. I was indecisive. I didn’t get a good jump on the ball. All during the series balls I thought would fall in front of me were going over my head. Cookie Rojas was jammed and hit one over my head once. It’s tough to pick up the ball here because there’s a gray background, plus you don’t hear the ball off the bat that well. It’s a very dead sound. When I play center field, which I usually do, I follow the pitch and the sound of the bat has a lot to do with the way I react. Then after I ran in I stopped because I didn’t think I could get to the ball.”
- Steve Brye, after being told at the airport of McRae's accusations

After seven seasons with the Twins, Brye spent a season each with the Milwaukee Brewers and the Pittsburgh Pirates before playing his last game.

About This Card
So far in this blog, Brye's photo marks the fourth Twins card at Yankee Stadium Photo Day. 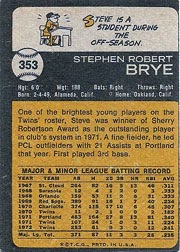