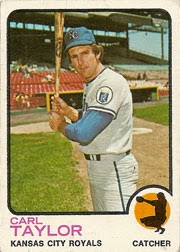 About This Player
Carl Taylor spent six seasons in the Major Leagues and three of them with the Kansas City Royals.  Taylor started his career with the Pittsburgh Pirates and spent this career as a backup catcher, outfielder, and pinch hitter.  Taylor had his best season with the Pirates in 1969 in which he hit .348; he did not have the at-bats to qualify for the National League batting title.

Taylor is also stepbrother to Orioles slugger, Boog Powell.  In 1971, Powell had talked to Taylor after he pulled himself out of a game, told his manager he quit, and burned his uniform and baseball equipment in the clubhouse.  Taylor went AWOL, but, eventually, returned to the team.

For more information:
Rome News-Tribune - May 23, 1971 - Powell had a special reason for talking with Carl Taylor

After his playing career ended in 1973, Taylor attempted a career in hair styling.

"Believe it or not, there are similarities between the two professions. An error in a baseball game is made in view of some 40,000 people. A terrible haircut can also be seen by possibly the same number of people."
- Carl Taylor

About This Card
Carl Taylor is specified in his card as a "Catcher", although he has a career of being more versatile. However, Taylor did play more games behind the plate in 1973 than at any other time during this career. 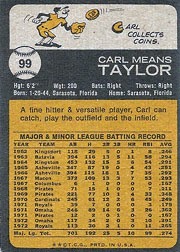