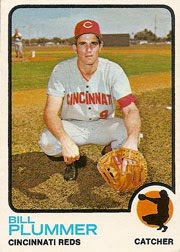 About This Player
Bill Plummer spent ten seasons in the Major Leagues.  Plummer made his big league debut with the Cubs, but spent most of his playing career catching with the Cincinnati Reds and backing up Johnny Bench. Plummer was a member for five of Cincinnati's playoff teams, including their two World Series wins, but never played in the World Series.

Despite being a .188 hitter, Plummer had some big moments. In 1974, Plummer slammed two home runs in one game against Philadelphia's Steve Carlton.

For more information on Plummer's career with the Reds:
Sports Illustrated - July 18, 1977 - Few Things Come To Him Who Waits

Afterward, Plummer continued to manage in both independent and minor league baseball.  He joined the Arizona Diamondback system in 2000 and was last coaching in 2013 with the Single-A Visalia Rawhide.

About This Card
Although Plummer debuted with the Cubs in 1968, he did not have an appearance on a Topps card until five years later. 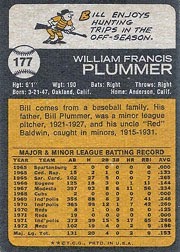