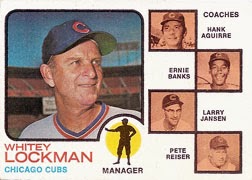 About This Manager
Whitey Lockman only managed the Chicago Cubs for parts of three seasons, but he had a career in baseball that spanned more than 59 years.

Lockman started his 15-year playing career with the New York Giants in 1945 at the age of 18.  He hit a home run in his first Major League at bat. During his career, Lockman played in two World Series (losing to the Yankees in 1951 and winning against the Indians in 1954) and was named the starting first baseman in the 1952 All-Star Game. In addition to his time with the New York and San Francisco Giants, Lockman also played with the Cardinals, Orioles, and Reds before playing his final game in 1960.

Immediately after his playing career ended, Lockman started coaching. He joined the Reds coaching staff in 1960 and, then, joined the Giants as a third base coach in 1961. Lockman joined the Cubs in 1965, first, as a minor league manager, then an MLB coach, and later as supervisor of player development.

Lockman succeeded Leo Durocher to manage the Cubs in 1972 and revitalized the team with a 39-26 record to finish the season and jump two places in the standings. However, poor records in 1973 and 1974 cost Lockman his job and he moved back to the front office.

Lockman served as the Cubs' vice president of player development in his front office return and remained in the role through 1989. Lockman also served in front office roles with the Expos (1990-1992) and Marlins (1993-2001). Lockman retired from baseball in 2001. 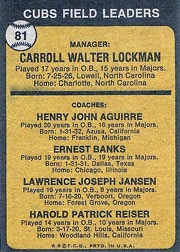