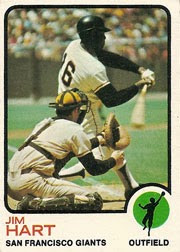 About This Player
Jim Hart, better known as "Jim Ray Hart", spent 12 seasons in the Major Leagues and 11 of them with the San Francisco Giants.  Hart's entry into the big leagues in 1963 started with a rough welcome. In his second game, Hart was hit with a Bob Gibson fastball and broke his left scapula. A few days after returning from injury, he was beaned by Curt Simmons and missed the rest of the year.

Hart had his breakout season the following year as the team's starting third baseman and was one of three Giants to hit at least 30 home runs; Hart hit 31 home runs in 1964, while Orlando Cepeda hit 31 and Willie Mays hit 47. Hart was also one of three Giants with at least 30 home runs in 1966; Hart hit 36 home runs, while Willie McCovey hit 33 and Willie Mays hit 37. Hart finished 2nd in Rookie of the Year voting in 1964 to Dick Allen of the Philadelphia Phillies.  Hart had very strong seasons from 1964 through 1968 averaging 28 home runs a year in this span, receiving MVP votes in three of those seasons and earning an All-Star berth in 1966.

A shoulder injury in 1969 led to a significant drop in playing time, although on July 8, 1970, Hart hit for the cycle and also earned a distinction of collecting six RBI in one inning.  The New York Yankees purchased Hart's contract early in 1973 and Hart received significantly increased playing time as a designated hitter. Hart played his final game in 1974 and was released.

About This Card
Hart was always better known as "Jim Ray" throughout his career, but his Topps cards are shown as JIM HART.  Only his final card in 1974 Topps is shown as JIM RAY HART.  In addition, Hart is specified in this card as an outfielder, although he played exclusively at third base the previous season.  Also add in that even though Hart started 1973 with the Giants, he was well established in the Yankees lineup by the time this card was released. 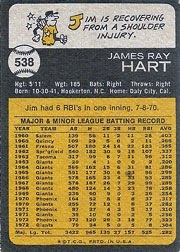