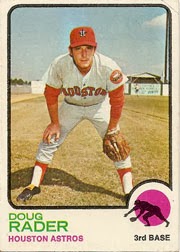 About This Player
Doug Rader played 11 seasons in the Major Leagues and his first nine with the Houston Astros. Rader made his big league debut in 1967 starting at first base as the Astros were considering trading an aging Eddie Mathews. When Mathews was traded, Rader became the regular starter. In 1968, Rader became the starting third base taking the job from Bob Aspromonte, who had been the starter at third since the Astros' inception. As a defensive star, Rader earned the first of five straight Gold Gloves in 1970. Rader finished his final two seasons with the San Diego Padres and Toronto Blue Jays.

Rader had a reputation for being easy going and never letting the game get him down. He's been accused of being a "flake," which he would debate.


"A 'flake' to me is someone who is willfully irresponsible. I'm not. Possibly I've been said to be one because I feel people take the game too seriously at times. Fans and players alike. I think they have a tendency to lose perspective. We play it for money and it is our profession but baseball is still a game. That's the way I try to look at it, and I feel I should derive some pleasure in what I'm doing. I'm happy to say I do. How? By being myself."
- Doug Rader

About This Card
As the cartoon states, Rader was called "The Red Rooster." He received the nickname because of his red hair. 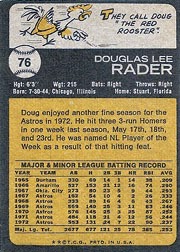