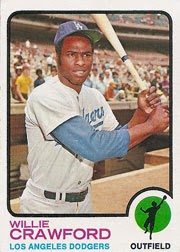 About This Player
Willie Crawford played 14 seasons in the Major Leagues and 12 of them with the Los Angeles Dodgers. A high school standout in baseball, football, and track, Crawford was signed two days after graduation by Tom Lasorda, who was a Dodger scout at the time. All 20 Major League teams were interested in the left-handed hitting Crawford, but the Los Angeles native signed with this hometown Dodgers for a $100,000 bonus.

Crawford made his Major League debut in 1964 at the age of 18.  Because of the "bonus baby" rule in place before the amateur draft was instituted, Crawford spent the entire 1965 season on the Dodgers roster though he only had 27 at bats. Crawford spent the next three seasons mostly in the minors though he was finally established as a big league outfielder in the middle of the 1968 season.

Although he never became the superstar the Dodgers hoped he would be, Crawford hit very well against right-handed pitching and was cast as a platoon player during his tenure. His finest season came in 1973 in which Crawford hit .295 with 14 home runs and 66 RBI; he hit .325 against righties while batting .205 against lefties in that season.  Crawford played his final two seasons, through a number of trades, with the Cardinals, Astros, and A's.  The Dodgers signed Crawford for spring training in 1978, but was released before the regular season began.

Crawford spent 1978 and 1979 playing in the Mexican League before retiring from baseball at age 32. 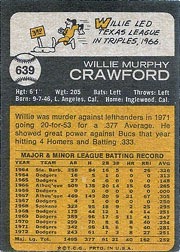