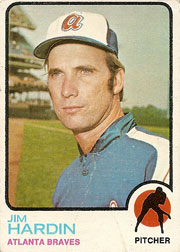 About This Player
Jim Hardin pitched six seasons in the big leagues and only this final season with the Atlanta Braves.  Hardin made his Major League debut with the Baltimore Orioles in 1967.  Hardin had his best season the following year in which he pitched to a 18-13 record with a 2.51 ERA and 16 complete games.  After four-and-a-half seasons in Baltimore, Hardin was traded to the New York Yankees.  He signed with the Atlanta Braves in 1972 with whom he would play his final season.

Hardin died on March 9, 1991 when the plane he was piloting crashed in Key West, Florida.  Shortly after take off, the propeller from his aircraft failed from fatigue.  The aircraft stalled and the plane crash while Hardin attempted to return to the airport to make an emergency landing.  It was widely reported that, during the plane's descent, Hardin steering the plane away from a baseball field filled with young children.  The plane came to rest in a parking lot of a TGI Fridays restaurant, which was under construction at the time.  Hardin is one of three Yankees to lose their lives in aviation accidents; the other two are catcher Thurman Munson (1979) and pitcher Cory Lidle (2006).  Hardin was survived by his wife and three children. 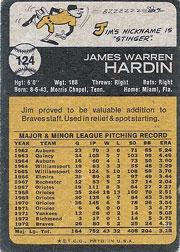