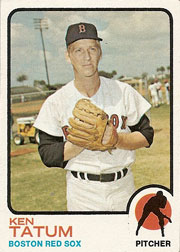 About This Player
Ken Tatum enjoyed a brief six year career in the Major Leagues and three with the Boston Red Sox.  Tatum made his big league debut with the California Angels in 1969 and show himself as a top performer in his rookie season with a 7-2 record, 1.36 ERA, 22 saves and fourth place in Rookie of the Year voting.  In his sophomore season, Tatum pitched to a 7-4 record, 2.94 ERA and 17 saves.

Tatum joined the Red Sox prior to the 1973 season as the result of a trade.  The blog, Halos Haven, describes the trade as follows:


"[Ken Tatum] was traded along with Doug Griffin and Jarvis Tatum (no relation) to Boston for three players, one of them being Ray Jarvis, making it the only known MLB trade where two players with the same last name were traded for a player whose last name was the first name belonging to one of those two players." - Halos Haven

Since arriving in Boston, Tatum suffered a series of injuries and his performance declined.  After three seasons, a series of trades led to Tatum playing his final season with the White Sox in 1974.

About This Card
Ken Tatum, as the back of his Topps card states, was nicknamed after basketball star, "Goose" Tatum.  The nickname is not to be confused with Hall of Fame pitcher, Rich Gossage, also nicknamed "Goose." 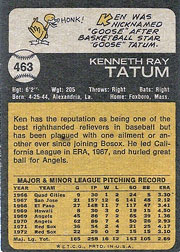