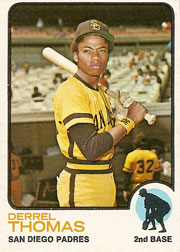 About This Player
Derrel Thomas enjoyed 15 seasons with seven different teams.  Thomas was selected by the Houston Astros with the first overall pick in the 1969 draft.  He made his big league debut in 1971 playing in only five games that year.  Thomas was traded the following season to the San Diego Padres with whom he played four seasons.  Thomas also spent time with the Giants, Dodgers, Expos, Angels and Phillies.  Throughout his Major League career, Thomas had played at every position except pitcher.

Thomas continues to remain active in baseball through coaching.  Starting in 2009, Thomas joined the Los Angeles Dodgers organization serving as a representative of the Dodgers Legend Bureau.

About This Card
The card back bears a wax stain, which was common for Topps cards before 1992. 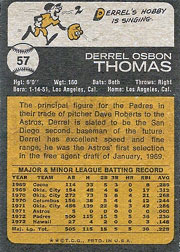