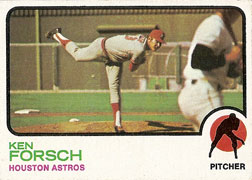 About This Player
Ken Forsch pitched 16 seasons in the big leagues and 11 of them with the Houston Astros.  Forsch made his made his Major League debut with the Astros in 1970.  After the 1980 season, Forsch was traded to the California Angels for Dickie Thon.  Throughout his career, Forsch pitched both as a starter and a reliever.  He was selected as an All-Star in 1976 and 1981.

On April 7, 1979 Forsch pitched a no-hitter and shut out the Atlanta Braves.  His brother, Bob Forsch, threw two no-hitters with the Cardinals.  Thus, both pitchers became the only set of brothers to pitch no-hitters in Major League history.

Forsch pitched his final game in 1986.

About This Card
Bob Forsch passed away suddenly last night at the age of 61.  It just seemed fitting to feature his brother, Ken, today. 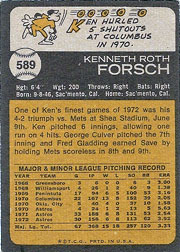