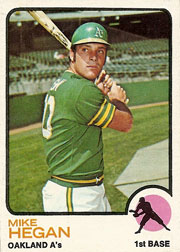 About This Player
Mike Hegan enjoyed 12 seasons in the Major Leagues and three seasons with the Oakland Athletics.  Hegan made his big league debut with the New York Yankees in 1964.  He played for only brief moments early in his career for the Yankees with 5 games in 1964, 13 games in 1966 and 68 games in 1967.  Hegan had his most prolific season in 1969 for the expansion Seattle Pilots; Hegan hit the first home run in Seattle Pilots history with his first at-bat and has the distinction as the only All-Star to represent the Pilots in their only year.  Hegan would begin to leave his mark defensively with a record errorless streak of 178 games at first base that started during his tenure with the Brewers in 1970 and ended as a backup first baseman with Oakland in 1973.  Hegan was a member of the 1972 World Series Oakland A's team with which he served primarily as a left-handed pinch hitter and backup to Mike Epstein at first base.  Hegan would later play again for the Yankees and finish his career with a second stint with the Brewers.

After retiring from baseball, Hegan spent the next 12 seasons as a color commentator for the Milwaukee Brewers.  He joined the Cleveland Indians in 1989 and served as a broadcaster until the end of this season.  Next year, Hegan will transition from the booth to a role as an alumni ambassador with the Indians.

Mike's father, Jim Hegan, spent 17 seasons primarily as a catcher and was a five-time All-Star.  Jim and Mike are the first father and son combination to have won a World Championship.

About This Card
The cartoon on the back of the card highlights Hegan's early broadcasting interests.  During the offseason in 1970, Hegan began doing drive time sports reporting and TV interviews for WTMJ-TV in Milwaukee. 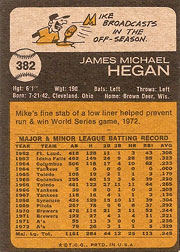