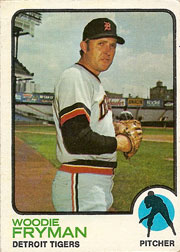 About This Player
Woodie Fryman pitched 18 seasons in the Major Leagues and three of them with the Detroit Tigers.  Fryman made his big league debut with the Pittsburgh Pirates in 1966.  Fryman was a two-time National League All-Star with the Philadelphia Phillies and the Montreal Expos.

However, Fryman might better known as the midseason acquisition of the American League Detroit Tigers.  After pitching to a 4-10 record and 4.36 ERA to start off his 1972 season, the Phillies placed Fryman on waivers.  He was picked up by the Tigers and pitched to a 10-3 record and 2.06 ERA for his new team.

His key moment came in the second game of the final series of the year against the Boston Red Sox.  The Red Sox scored on an unearned run in the first inning.  Pitching against Luis Tiant, Fryman allowed only two more hits after the first inning.  After giving up a hit in the eighth, Chuck Seelbach relieved Fryman and closed the game.  Fryman earned his 10th win and the Detroit Tigers clinched the American League East.

Fryman pitched his final game in 1983 with the Expos, with whom he had spent a total of eight seasons.

Fryman was inducted into the Montreal Expos Hall of Fame in 1985 and the Kentucky Sports Hall of Fame in 2005.  Fryman passed away in 2011 at the age of 71 in his hometown in Ewing, Kentucky where he was a tobacco farmer.

About This Card
In another of many shots that Topps photographers took at Yankee Stadium, Fryman poses in his away uniform.  Traditionally, the Detroit Tigers don caps with the white "D" for home games and caps with the orange "D" for away games. 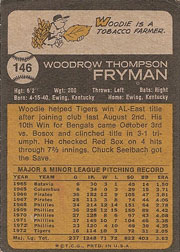