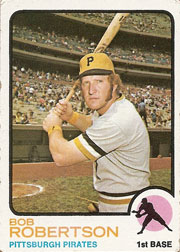 About This Player
Bob Robertson enjoyed 11 seasons in the Major Leagues and nine of them with the Pittsburgh Pirates.  Robertson made his big league debut in 1967.  He missed the entire 1968 season because of a kidney obstruction and returned the following year.  Once Robertson established himself in the starting lineup in 1970, he appeared to have a bright future ahead of him.  Robertson hit 26 and 27 home runs in 1970 and 1971 respectively.  Robertson, described by Pirates announcer Bob Prince as "The Mount Savage Strongboy", was also the first ever to hit a home run in the upper deck at Three Rivers Stadium; the home run came off of San Diego Padres pitcher Steve Arlin in 1971.

His finest moment came in the 1971 postseason.  Robertson hit .438 with four home runs (three of which came in Game 2) and six RBI in the NLCS against the San Francisco Giants.  He later hit two home runs in the World Series against the Baltimore Orioles.  Robertson might be best known for the bunt sign he missed.  With Roberto Clemente on second, Willie Stargell at first and Mike Cuellar pitching, the third base coach called for a bunt.  With Robertson never having bunted and the Pirates down 2-0 in the series, his plan was to hit as far as possible.  In the replays, Clemente can be seen calling a time out, but Cuellar had thrown the pitch and Robertson had hit the ball into the right-center bleachers.  Robertson never knew his "mistake" until returning to the bench and seeing manager, Danny Murtaugh, with his cap over his face and laughing.

For more information:
Pirates remember Bob Robertson; so do O's

However, the following season, Robertson began experiencing chronic back problems and his production declined. After having surgery done on both knees in 1974, Robertson was reducing to being a backup player. Robertson later went on to play one season with the Seattle Mariners and another season with the Toronto Blue Jays before retiring in 1979.

About This Card
Out of all of the members of the Pittsburgh Pirates, Bob Robertson probably looked most like a real life pirate. 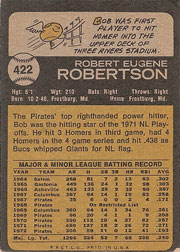