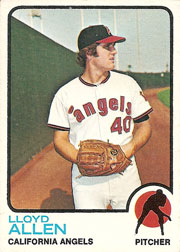 About This Player
Lloyd Allen pitched in seven seasons as a big league reliever and five of them with the California Angels.

Drafted in the first round of the 1968 draft, Allen looked to have a bright future ahead of him.  Allen made his Angels debut in 1969 and, at the age of 19, had the rare distinction of being the youngest player in the Major Leagues on the same team as the oldest player (Hoyt Wilhelm at age 46.) Allen pitched his finest season in 1971 with a 2.49 ERA and 15 saves that season.  In 1972, Allen had a 3.48 ERA and 5 saves on an Angels team that reached only 16 saves that season.

From there, Allen's career went downhill. Allen had trouble finding the strike zone and, in five games with the Angels, he recorded a 10.38 ERA.  Allen was traded to the Texas Rangers in 1973.  He was selected from waivers by Chicago White Sox in 1974.  Allen made his final Major League appearance in 1975. 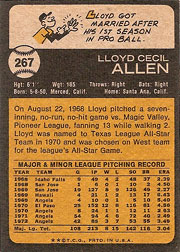