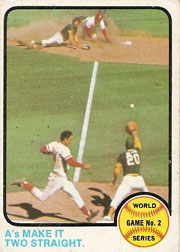 About This World Series Game
Jackie Robinson made his final public appearance before Game 2 of the 1972 World Series.  (He would pass away nine days later.)  In his speech, he expressed his desire to see a black manager of a Major League team, a barrier not yet broken at the time.

Game 2 became a close low-scoring match-up in which Catfish Hunter pitched eight strong innings and Rollie Fingers notched the save in the 2-1 win.  Joe Rudi was the hero of the game with a home run in the first inning off of Ross Grimsley and a game-saving catch against the left field wall in the ninth inning of a ball hit by Denis Menke.  The Reds futility showed with lead runners on in five innings but only scoring one run in the ninth.

About This Card
The photograph shows a fielder's choice play in the bottom of the sixth inning.  With Dick Green playing second base and Mike Hegan manning first, Tony Perez grounded the ball which forced Johnny Bench out.  In this case, Perez beat the relay to first. 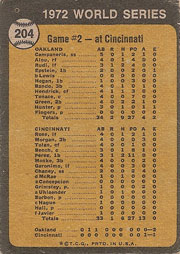