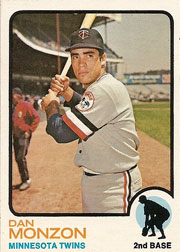 About This Player
Dan Monzon enjoyed only a brief career in the Major Leagues. Monzon was drafted by the Minnesota Twins in 1967.  He made his big league debut in 1972 and remained on the Twins roster for two seasons in a utility role.  Monzon was demoted back to the minor leagues in 1974, traded to the Montreal Expos organization and would remain in the minors through 1977.

Monzon started his next phase in baseball in 1978 as a minor league manager for the New York Mets organization. He later became a scout and covered Latin America for the Mets, Chicago Cubs and Chicago White Sox.  In 1995, the Boston Red Sox named Monzon their supervisor of Latin American scouting.

Monzon died tragically in an automobile accident the Dominican Republic in 1996 at the age of 49.

About This Card
Dan Monzon appeared in one of many shots that Topps photographers took at Yankee Stadium. 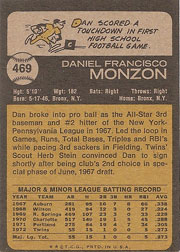