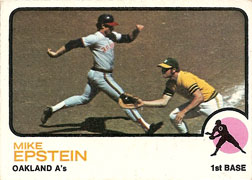 About This Player
Mike Epstein played nine seasons in the Major Leagues and two of them with the Oakland A's.  While playing for the Stockton Ports of the California League in 1965, Epstein was given the nickname "Super Jew" by rival coach, Rocky Bridges, after hitting a home run over the light tower in center field; Epstein would go on to lead the California League in batting average and home runs and earn the MVP for the league.

Epstein made his Major League debut in 1966 for the Baltimore Orioles with whom he played only six games.  When Epstein was demoted back to the minors, Epstein refused to report and was later traded to the Washington Senators.  Epstein had his finest season in 1969 in which he hit .278 with 30 home runs and 85 RBI in the reconstituted Senators' only winning season.

Epstein joined the Oakland A's when he was traded, along with pitcher, Darold Knowles, from the Rangers in May 1971.  In 1972, Epstein hit 26 home runs, third in the American League, for the World Champion A's.  During the playoffs, Epstein wore a black armband in memory of the 11 Israeli athletes murdered during the Munich Olympics; teammates Ken Holtzman and Reggie Jackson also wore black armbands.

Epstein was traded to the Texas Rangers in 1973 and traded again mid-season to the California Angels.


“The reason I got traded from Oakland was because there was an altercation in the clubhouse in Texas. Reggie (Jackson) was spouting off, doing dumb things…and I wound up going over and knocking him out. He was unconscious on the floor…club owner Charlie Finley…got me on the phone and said, ‘I ought to trade you.’ I said, ‘Why?’ He said, ‘You’re the bad apple.’ I said, ‘I would think that you would go and ask the other guys on the team. The bad apple is unconscious on the floor in the clubhouse.”
- Mike Epstein, Matzoh Balls and Baseballs


Epstein was inducted into the United States National Jewish Hall of Fame in 2004.  He ranks sixth all-time in home runs among Jewish Major Leaguers.

About This Card
While Mike Epstein had already been an established Major League veteran in 1973, he's barely featured on the front of his own baseball card.  Epstein, shown in the bottom right, is holding Jim Spencer at first base. 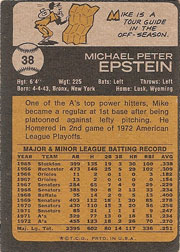