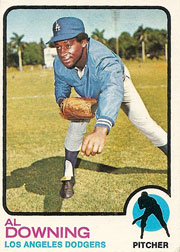 About This Player
Al Downing enjoyed 17 seasons as a Major League pitcher and his last seven seasons with the Los Angeles Dodgers.  Downing made his big league debut with the New York Yankees in 1961 and spent his first nine seasons with the team.  He earned his only All-Star appearance in 1967.  He was traded to the Oakland A's to start the 1970 season and finished that season traded to the Milwaukee Brewers.

After a dismal 1970 season in which he pitched to 5-13 record, Downing was traded to the Dodgers.  He responded to the trade with only 20 win season, five National League leading shutouts and the National League Comback Player of the Year Award.  Downing also finished third in the Cy Young balloting behind Ferguson Jenkins and Tom Seaver.

Downing is also known for giving up Hank Aaron's record-breaking 715th home run on April 8, 1974.  Despite this, Downing made his third post-season appearance with a Dodgers team that lost to the Oakland A's in the World Series.

Downing pitched in his final game in 1977.

About This Card
I wonder if Topps drew their pitcher silhouette based on Al Downing or if Al Downing was asked to pose like the silhouette. 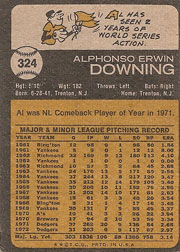