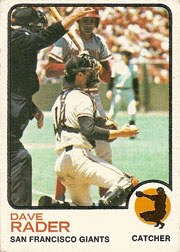 About This Player
Dave Rader enjoyed ten seasons in Major League Baseball with his first six as a member of the San Francisco Giants.  Rader was the Giants' first selection in the 1967 draft.  Rader came in second in National League Rookie of the Year voting in 1972.  Rader also caught Ed Halicki's no-hitter in 1975.  Rader finished his last four seasons playing one season each with the Cardinals, Cubs, Phillies and Red Sox.

About This Card
The card features an in-game shot at Candlestick Park in San Francisco. 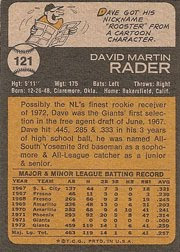