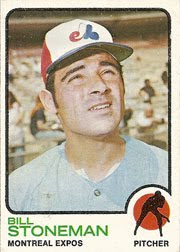 About This Player
Bill Stoneman played eight seasons in the Major Leagues with five of them being with the Montreal Expos.  Stoneman started his career with the Cubs, but was one of the original Expos drafted in the expansion draft for the 1969 season and soon established himself as the team's ace.  Stoneman pitched two no-hitters with the Expos: the first against the Phillies in 1969 and the second against the Mets in 1972.  His second no-hitter was the first in Major League Baseball history thrown outside of the United States.

After the end of his playing career, Stoneman worked his way up through the Expos' front office and, eventually, became the team's general manager in 1987.  Stoneman became the general manger for the Angels in 1999 and oversaw that team's only World Series team.  Currently, he serves in a consultant role for the Angels.

About This Card
One of the flavors about most of the Topps vintage sets are the cartoons on the back of the card that add some fun information about the player and the cartoons add flavor to the 1973 Topps set. 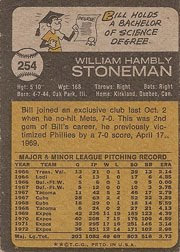