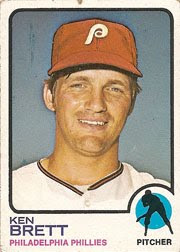 About This Player
Ken Brett made his Major League debut in 1967 with the Boston Red Sox at the age of 19.  While he only pitched in one game during the regular season, Brett pitched in two games during the World Series and was recognized as the youngest pitcher in World Series history.  Brett would later continue his career as a journeyman pitcher playing for 10 different teams during his 14 year career, including an All-Star selection in 1974.

Ken is the brother of George Brett, who played 21 seasons for the Kansas City Royals and went on to be elected to the Hall of Fame.

Ken Brett passed away on November 18, 2003 from brain cancer.

About This Card
Brett was a member of the Phillies in 1973, but played for the Brewers in 1972.  As such, this card is one example of photos that Topps had airbrushed to match the current team.  While the outlining of the hat is awkward and the stripes from the jersey collar still remain (although matched to Phillies colors), in my opinion, this card is one of the better airbrushing examples from Topps cards at the time. 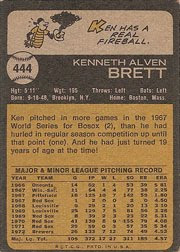