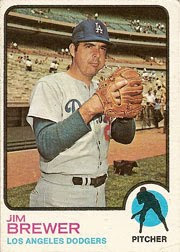 About This Player
Jim Brewer enjoyed 17 seasons in the Major Leagues, including 12 with the Los Angeles Dodgers, three World Series appearances and an All-Star selection in 1973.  Brewers has 132 saves throughout his career, including 125 with the Dodgers.  Brewer appears in 474 games for the Dodgers, the third most in club history behind Don Sutton and Don Drysdale.  Brewer, with advice from Warren Spahn, developed a screwball to become one of the National League's most effective relievers in his time.

Brewer is probably best known for an incident during his rookie season with Billy Martin.  Linked below is an article from The Milwaukee Journal about the incident:
Baseball Must Share Martin's Guilt In The Jim Brewer Incident

Brewer died in 1987 from injuries resulting from a car accident the day before his 50th birthday.


"You have to take good care of yourself. But the big thing is not losing your interest. A lot of guys I 've known have just gotten tired of the lifestyle and given up on themselves. I've had two operations on my arm and I've had back problems. It would have been easy for me to quit, but I haven't. That's because I feel like I want to play baseball all my life."
- Jim Brewer

About This Card
I did not know much about Jim Brewer before writing this entry.  I find the fun facts on the backs of the cards interesting and the fact about Brewer led me into more research, including his tie-in to Warren Spahn and, despite the Billy Martin incident, Brewer was able to enjoy a lengthy career in baseball. 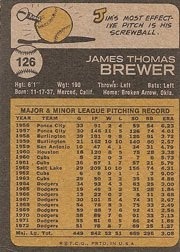