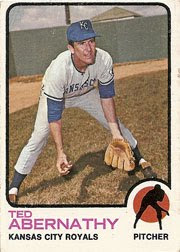 About This Player
Ted Abernathy played for seven different teams over 14 Major League seasons.  Abernathy recorded 148 saves throughout this career and lead the National League in saves in 1965 and 1967.  Abernathy finished the last three seasons of his career with the Royals and in his final year, 1972, was the oldest player in the Major Leagues at that time.

Abernathy was known for his submarine pitch.  He developed that pitching motion, switching from a three-quarters overhand motion, shortly after shoulder surgery left this career in doubt.


"With the unique underhand motion, (Ted) Abernathy's curveball rises and his fastball sinks. He's almost impossible to hit when you only get one shot at him. You see the overhand stuff all the time, then this guy comes in there throwing the ball from out of the ground." - 1971 Kansas City Royals Yearbook

About This Card
The 1973 Topps Ted Abernathy card is his final regular issue card. 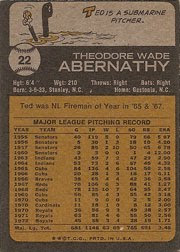