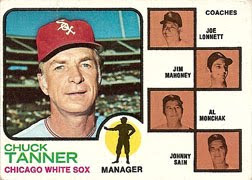 About This Manager
Chuck Tanner spent 19 seasons as a manager in Major League Baseball.  Six of his seasons as manager were spent with the White Sox.  In 1972, Tanner led the Chicago to a second place finish.  He led them to a fifth place finish in 1973.  Tanner is probably best remembered for his time with the Pirates which includes a World Series championship in 1979.

Tanner also spent eight seasons as an left fielder with the Braves, Cubs, Indians and Angels from 1955 through 1962.

About This Card
I like that the manager cards in 1973 also feature the coaches.  Throughout the history of Topps baseball, manager cards have been a regular issue, but including coaches has been on and off.  Personally, I would like to see manager/coaches card in new sets, such as we had seen in 2008 Topps Heritage.

It is also amazing to see coaches on these manager cards who have also had significant careers as players, such as Johnny Sain, the former Braves and Yankees pitcher who was a three-time All-Star and four-time 20-game winner. 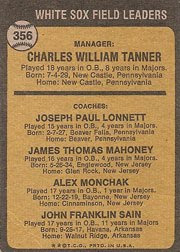