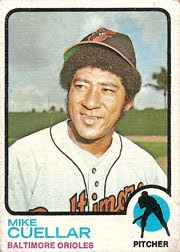 About This Player
Mike Cuellar was a Cuban-born pitcher who played in 15 big league seasons.  Cueller was a four-time 20-game winner, a four-time All-Star and the Cy Young Award winner in 1969.  He played his best years with the Orioles with whom he pitched in three World Series.  He was also one of four Orioles pitchers in 1971 to win 20 games.

About This Card
It cannot be seen in the photo, but there is a crease down the middle of the card.  For the most part when building the set I have not really been concerned about condition.  Usually when I start building from lots, I expect to find cards in varying conditions.  The condition adds to the flavor and the history of the card itself. 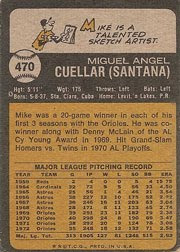