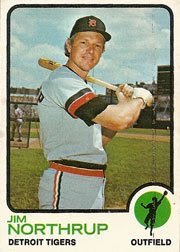 About This Player
Jim Northrup played in 12 Major League Baseball seasons with 11 of those with the Tigers.  Northrup started in all three outfield positions throughout his career.  His best season came in 1968 in which led the Tigers in hits and RBIs, finished 13th in the Most Valuable Player voting and played all seven games in the World Series victory.  Northrup was traded to the Expos in 1974 and went to the Orioles later that same year.

After retiring from Major League Baseball, Northrup continued to remain active in sports.  Northrup played professional softball for two seasons.  He later became a color analyst for the Tigers.  Northrup was inducted into the Michigan Sports Hall of Fame in 2000.

About This Card
The cartoon on the card displays one fun fact of Northrup's athleticism.