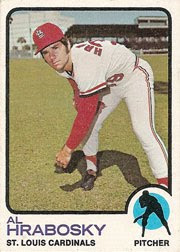 About This Player
Al Hrabosky enjoyed 13 seasons in the Major Leagues and eight of them with the St. Louis Cardinals.  Hrabosky made his debut in 1970.  Nicknamed the "Mad Hungarian" and known for his character and pitching routine, Hrabosky established himself as an elite reliever on the Cardinals' roster in 1973.  His best season came in 1975 in which he pitch with a 1.66 ERA and a National League leading 22 saves and received the National League Fireman of the Year award.  Hrabosky would also spend time with the Royals and Braves.

After finishing his playing career, Hrabosky transitioned quickly to the broadcasting booth and serves as the color commentator for Cardinals broadcasts.

About This Card
Al Hrabosky is shown on his card before sporting his signature Fu Manchu mustache that added to the mystique of "The Mad Hungarian." 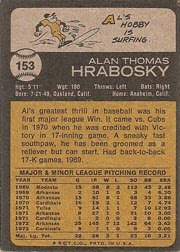